Two Pedestrians, Including One Teen, Killed While Crossing Streets 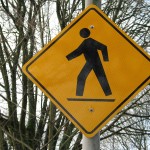 Two pedestrians, including one teen, were struck and killed by separate cars in Lexington, Kentucky.  It appears that both accidents may have happened at night or at times of low visibility.  No information existed on whether the accidents occurred at intersections or crosswalks or in low lighted areas.  One of the drivers faces pending criminal charges for hit and run.  No criminal charges were reported in the other accident.

I recently reported on the Louisville area’s poor ranking for pedestrian accidents.  These recent accidents show that pedestrian fatalities continue to be a concern.  However, the most striking result of the Courier Journal’s article is not the discussion on ways to improve the situation, but instead the discussion on who was to blame for the accidents.  I heard many comment that since they had observed pedestrians crossing traffic illegally at one time or the other, the pedestrians were to blame.  This argument is similar to comments I hear when the subject of bicycle fatalities arises.

Blaming the victims of these terrible accidents does nothing to reduce the likelihood of their occurrence.  Each accident is different and when it comes to blame, experience tells me there is plenty to go around.  While the lack of a citation may evidence a lack of criminal responsibility, it does not mean the accident was the pedestrian’s fault.  In fact, the driver may still face civil liability for the accident.

We have all experienced a situation where a pedestrian did not exercise the best judgment concerning where to cross, the type of clothing to wear, or the proper respect to show an oncoming car.  However, that fact alone does not excuse drivers from exercising caution or doing their best to keep a proper lookout for pedestrians.  This is true whether or not the pedestrian is exercising judgment for their own safety.  Ultimately, nothing will reduce these accidents, if pedestrians and drivers fail to respect each other’s right to use the roadway.